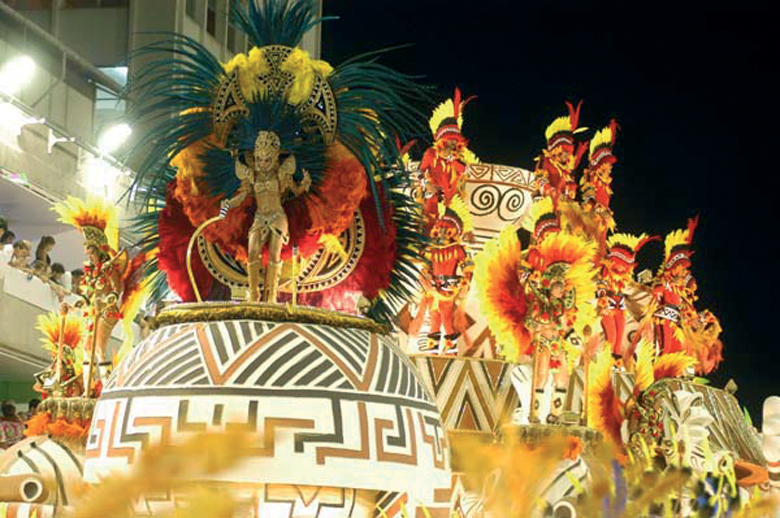 THE TITLE OF CHAMPION IS ENOUGH! THERE IS NO SPECIAL PRIZE FOR THE WINNER. HOWEVER, THE CELEBRATIONS, DANCING, COLOUR AND MIRTH, THOUSANDS AND THOUSANDS OF OSTRICH FEATHERS AND LONG DAYS OF FUN AND MUSIC MAKE THE STREET CARNIVALS OF SOUTH AMERICA AN UNFORGETTABLE EXPERIENCE.

For thousands of years people have been adorning themselves and dancing to pay tribute to their gods. This is also the reason why the Roman Catholic Church recognises the world-renowned Rio Street Carnival as an official celebration that takes place 40 days before the fast which precedes Easter.

“Since Samba schools strive to perform better year after year, no one will dare to wear the same costume twice.  After all, every Samba school wants to be known as the champion.”

According to Joao Rodolfo Maurer Thomi, who is involved in the feather trade, the Rio Street Carnival started simply in response to a need to dance and celebrate with Samba music, and thereafter became a tradition.

“Every neighbourhood has its own Samba club to which various Samba schools belong. Over the years the schools structured themselves into a Samba league, as in the case of soccer teams, says Joao.

Besides the top league, there are another four levels of competition. The 14 best and most traditional schools always compete in the top league.

While the lower leagues’ dancing schools participate in the carnival during the week, the top league’s spectacle is reserved for Sunday and Monday – seven schools per day. Each Samba school has around 4 000 members who participate in the street carnival with six decorated floats.

The Samba schools’ music, costumes, the rhythm of the parade, the instruments, floats and the organisation of the schools are weighed up against each other.  Most costumes are discarded after the annual parade because they become tatty after all the jumping about and perspiration. After all, who wants to compete for the grand champion title in a second-hand costume?

Wednesday signals the end of the road for finalists when the champion is named for each league. As with sport, the weakest school in each league is shifted to a lower league. The winners of each league will, during the course of the next year, have an opportunity to perform at special occasions.

“Although most participants are locals, there is an increasing number of tourists each year who purchase costumes and are allowed to join the parade. One reason for this is that the carnival is becoming more spectacular and fascinating every year, says Joao.

All participants in the top league – for which everyone aims – are paid at national and provincial level by the government for their contribution to the tourism industry.

“After all, hasn’t this, for centuries, been one of the best-known festivals in the world?” asked Joao.

CARNIVAL IN SAO PAULO AND BAHIA

Sao Paulo, the largest city in Brazil, has also climbed on the bandwagon and is now staging a gigantic carnival, similar to the one in Rio. However, Joao is of the opinion that the Rio Carnival, given its magnificent Samba tradition, is and will remain the biggest.

The best-known carnivals in other cities such as Salvador in Bahia are quite different, says Joao. They close off their main street along the shore while thousands of people follow the rhythmic music of the music-wagon – the trio-electrico.

For more than five days the floats follow one another endlessly along the streets. Young people from Brazil like to attend the five-day party to the beat of genuine Bahia sounds which do not allow you to pause for a moment.

As the world leader in the ostrich industry, Klein Karoo’s ostrich feathers have for decades been an artistic feature at carnivals across the world.